Eager; the surprising, secret life of beavers and why they matter. 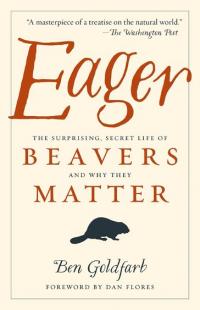 During this fascinating lecture Environmental journalist, Ben Goldfarb, reveals that everything we think we know about what a healthy landscape looks like and how it functions is inaccurate a historical artefact produced by the removal of beavers from their former haunts.

Across the Western Hemisphere, a coalition of beaver believers - including scientists, government officials, and farmers have begun to recognize that ecosystems with beavers are far healthier, for humans and non-humans alike, than those without them, and to restore these industrious rodents to streams throughout North American and Europe.

It’s a powerful story about one of the world’s most influential species, how North America was settled, the secret ways in which our landscapes have changed over the centuries and the measures we can take to mitigate drought, flooding, wildfire, biodiversity loss, and the ravages of climate change. And ultimately, it’s about how we can learn to co-exist, harmoniously and even beneficially, with our fellow travellers on this planet.

This event is part of the BBOWT Festival of Nature and includes a chance to buy a signed copy of Ben’s E.O. Wilson prize winning book.

Free, but must book.