In collaboration with Museum researchers, Oxford Printmakers Co-operative (OPC) have created artworks inspired by the very earliest animals. In amongst displays of fossils you will find original prints which explore the forms, textures and evolution of these fascinating animals. The prints were created after extensive workshops, conversations and idea-sharing with palaeontology research fellows from the Museum’s research team. 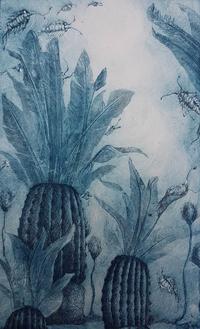 Pick up a map at the Museum Welcome Desk to explore the First Impressions trail around the building.

On display within the First Animals exhibition itself are eight smaller OPC works which are displayed alongside the plates that were used to create the prints. They reveal the connection between the print-making process and the formation of some of these early fossils, which often create a natural impression in the rock. They also demonstrate the variety of print-making techniques that the OPC members work with.

It is one of the oldest printmaking studios in the UK, formed in the 1970s, by a group of ex-Ruskin School of Art students and staff who wanted to continue their printmaking practice in a dedicated and professional environment. Since then many very able and distinguished printmakers have been through its doors.

OPC’s Rahima Kenner will be running a printmaking workshop at the Museum on 21 September 2019 where participants can make prints inspired by the First Animals exhibition and explore the ‘drypoint’ technique. Booking opens soon. Check back to this website for tickets - £35.

Oxford Printmakers Co-operative have a further exhibition of their work inspired by First Animals at The North Wall arts centre in Oxford. 9 July - 10 August 2019.

Want to see other Museum displays?