The Search for the Lost Brains

At a time where global ocean health and marine biodiversity are suffering some of the greatest existential threats in the history of our blue planet, a far-flung and isolated corner of the central Indian Ocean offers something of a respite. Dr Bryan Wilson is a researcher in the University's Department of Zoology, looking at the recovery and resilience of corals in the Chagos Archipelago, and funded by the Bertarelli Foundation (as part of the Bertarelli Program in Marine Science). In this talk he speaks about expeditions to the Chagos, and about University's first "Reef Room", which he's developing to investigate the effects of climate change on coral species.

The Chagos Archipelago, some 500km due south of the Maldives, is one of the most remote coral reef systems on Earth, and also one of the very few wildernesses still relatively untouched by humankind. An oasis for contemporary times, it is an idyll of stunning 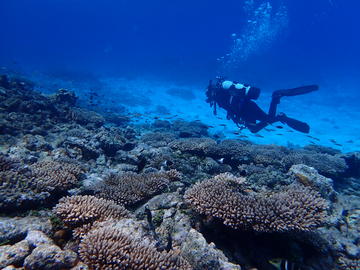 coral structures framing an ocean abounding with innumerable fish shoals, occasionally scattered by schools of dolphins, and under cover of darkness, the rich shivers of sharks. This region hearkens back to how reefs may once have looked the world over, a testament to Nature's ability to thrive in the absence of people. However, even here, the pernicious and far-reaching effects of anthropogenic climate change are keenly felt, and like so many of the world's marine habitats, the reefs here have of late been hit by increasingly frequent and extreme warming waters, leading to a dramatic reduction in the abundance of a number of coral species. The most notable of these has been the Chagos brain coral, Ctenella chagius, the world's rarest coral, and only found in this small cluster of uninhabited islands. Thought to be extinct, a recent expedition there revealed a small but extant population, hidden in the depths of a tiny desert island lagoon.

This is the story of that expedition and others, and the race to save this enigmatic and iconic species from the brink of extinction under our changing climate...