This iconic fossil was used in the first scientific description of a dinosaur – Megalosaurus – in 1824. It was acquired by William Buckland (1784–1856), Reader in Geology at the University of Oxford, after being found in a slate quarry in Stonesfield, Oxfordshire.

It was only later, in 1842, that Richard Owen coined the term ‘dinosaur’ to describe a group of animals including Megalosaurus and other recently found ‘great lizards’ such as Iguanodon.

This dentary bone was just the front half of the lower jaw. The blade-like, serrated teeth tell us that Megalosaurus was a meat eater. Its teeth were often damaged, worn out or lost in battles with prey or rivals. Fortunately, Megalosaurus could replace its teeth several times during its lifetime. In this specimen, six of the teeth are only partially erupted, with two just emerging along the gumline and only one fully erupted tooth remaining.

It is a mystery how this particular animal died. It may have been due to a lack of functional teeth, but it is also possible that many of the teeth fell out after death.

The display includes a letter to Buckland from a Stonesfield slater, David Oliver, telling of great bones being found at the slate quarry. 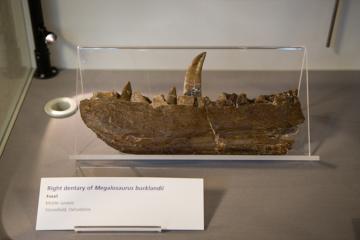 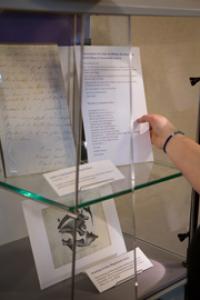