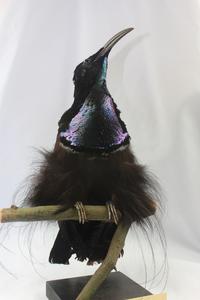 Birds of paradise are members of the family Paradisaeidae, which includes more than 40 recognised species. Their closest relatives are crows and jays, of the Corvid family. Birds of paradise inhabit rainforests in Papua New Guinea, Eastern Indonesia and Eastern Australia, and mainly feed on fruit and some insects.

The first bird of paradise to arrive in Europe was a skin that came to Spain in 1522. Many of the early skins were prepared by native hunters without wings or feet to better show off their spectacular plumage.

Upon arrival in Europe, the apparent lack of wings and legs created the myth that these birds originated from paradise and floated high in the skies, only to fall down to earth after their death.

Most species are sexually dimorphic, meaning males exhibit the spectacular plumage these birds are best known for, whilst females have much less ornamentation and coloration to help them blend in with their environment.

The males's display feathers are highly specialized and have evolved from basic feathers. Like all feathers, they are shed and regrown every single year, which puts quite a strain on male birds of paradise.

Hybridisation, when two birds of different species cross-breed, is quite common and can explain why many of the early described species were considered as 'rare'.