The breath of life

The Breath of Life 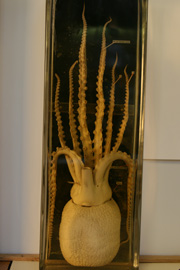 On 1 November, a one-day ‘Breath Festival’ of talks, performances and exhibitions took place around Oxford, including events at the Oxford University museums. Taking that theme, this temporary display looks at breathing across the animal kingdom. The evolutionary adaptations of this most basic life function are many and varied: a simple breath is not so simple after all.

All animals breathe to obtain oxygen for their bodies and to expel carbon dioxide, but there are many different ways of breathing. Terrestrial animals generally take in oxygen from the air, while for aquatic animals it usually comes from the water.

An octopus uses muscular movements to draw water into its mantle cavity, where it is forced over the gills and then expelled through a short tube called the 'siphon'. 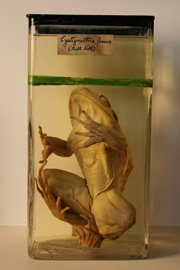 Some aquatic animals, such as sponges and jellyfish, take in oxygen by diffusion through their body wall. Others have specialist organs such as gills. But not all aquatic animals take in dissolved oxygen. Many insects, including diving beetles, have wing cases or hairy bodies that allow them to carry a bubble of air with them when they dip beneath the water’s surface. Aquatic mammals, including seals and whales, must come to the surface to breathe, and often have special adaptations for this.

Certain terrestrial animals, such as earthworms and amphibians, can breathe through their skins, but amphibians have simple lungs as well. All reptiles, mammals and birds breathe using lungs; in birds there is also a system of air sacs and air spaces within the bones that make breathing more efficient. Insects breathe through branching tubes called tracheae, while arachnids use folded structures known as 'book lungs'.