The First Animals exhibition at Oxford University Museum of Natural History will be extended until 1 September 2020 following unprecedented visitor numbers.

Visitor numbers to the exhibition crossed the 150,000 mark at the turn of the year, making First Animals the most popular exhibition so far in the Museum’s Contemporary Science and Society series, which began in 2014. The exhibition will now be extended until 1 September 2020.

“…a rare, possibly unique, chance to see specimens from the world’s three most important Cambrian explosion fossil sites side-by-side. For anyone fascinated by that time and its amazing cast, it is a must-see.” - New Scientist 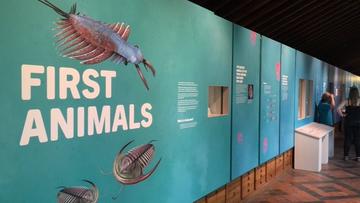 First Animals takes visitors on a journey back in time to explore the evidence for the origins of animal life in the ancient oceans more than 540 million years ago. In an extraordinary evolutionary event, which has never been repeated since, the Earth then experienced a huge increase in new life forms, many of which laid the foundations for the body plans of all subsequent animal life. This occurrence, termed the Cambrian Explosion, took place over a period of just 20 million years — a mere blink of the eye in geological terms – and First Animals reveals how amazing fossil evidence from this epoch is being uncovered and investigated to shed new light on our earliest beginnings.

Highlights of the exhibition include 55 exceptionally preserved fossils from Yunnan University in Chengjiang, displayed outside of China for the very first time, and the interactive Cambrian Diver installation, which allows visitors to explore a 360-degree ocean in a virtual submersible craft. The virtual reconstructions of the early Cambrian sea floor, made possible through close collaboration between researchers at the Museum and Yunnan University, bring our earliest animal ancestors to life and the animations help visitors, researchers and students alike to visualize the early ecosystems of the world’s oceans.

Reconstruction of arthropod Amplectobelua symbrachiata, thought to be the top predator in the Early Cambrian oceans. (reconstruction credit: Mighty Fossils)

Reconstruction of arthropod Amplectobelua symbrachiata, thought to be the top predator in the Early Cambrian oceans. (reconstruction credit: Mighty Fossils)

The fossils from Chengjiang, representing 11 of the major groups of animal life as well as a number of enigmatic and starkly different forms, are displayed alongside other evidence from Burgess Shale, Canada and Sirius Passet, Greenland. The loan of the Chengjiang fossils is made possible by the generosity of Yunnan University and the partnership between Oxford University Museum of Natural History and the Yunnan Key Laboratory for Palaeobiology.

“We’ve been very pleased to see such a positive response to the exhibition”, says Professor Paul Smith, director of Oxford University Museum of Natural History. “The virtual reconstructions have brought cutting-edge research to life for visitors, who have greatly enjoyed both the visual displays and the scientific understanding that has helped to inform their creation. Education is at the heart of the Museum, and the popularity of the exhibition has served to highlight the importance of sharing innovative research with the public. We are grateful to our partners and lenders for their assistance in creating the displays and their support for the extended run.”

The extended exhibition will be complemented by an expanded events programme including talks, tours, fossil-handling activities for families, and a palaeontological board games night.The additional talks and tours will explore the significance of preserving our geological heritage, and in a major event as part of the Festival of Nature the Museum will host a Fossil Roadshow on Sunday 24th May. Visitors will be invited to bring their own fossil finds to the Museum for identification and to find out more about collecting practice from the Museum’s expert research and collections teams.

First Animals is free to visit.