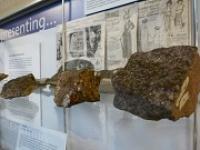 Bowman first acquired a taste for botany from his father, and his passion for science and hard-working approach made him a talented naturalist. He contributed papers to London’s Magazine of Natural History, as well as other journals, and was the author of one book – The Highlands and Islands: a nineteenth-century tour.

Working at first in his father’s tobacco shop, Bowman later became a banker and traveller. He visited the English Lakes, Scotland and Switzerland, where he collected fossils and mineral specimens. The Bowman collection now occupies five mahogany cabinets in the Museum, containing over 3,000 fossils, rocks and minerals.

Bowman’s travels and leisure pursuits always had some relevance to his natural history studies. On moving to Manchester in 1837, he pursued many branches of physical science, but in the last years of his life devoted himself almost exclusively to geology.

His contributions to geology were marked in the naming of two fossils: Endothyra bowmanni, a minute fossil which he discovered in Derbyshire, and Illaenus bowmani, a trilobite from the Ordovician period (485–443 million years old).