Find out how a 12 year old girl from Dorset became an expert on fossils and ancient beasts! 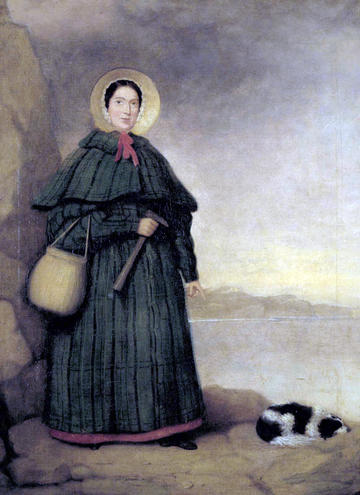 A portrait of Mary Anning and her dog Tray

Mary Anning was a palaeontologist and fossil collector. She lived between 1799 and 1847 in Lyme Regis on the Dorset coast. We were inspired to write this song after hearing the story of Mary’s life – one filled with amazing fossil discoveries and scientific insights. Though she also faced great challenges and hardships.

Mary’s family struggled to make ends meet and she used her fossil collecting skills to support them. When Mary was just 12 years old, she and her brother discovered the first specimen of an ichthyosaur – a marine reptile which went extinct 90 million years ago. She also collected and studied fossils of dinosaurs, as well as other ancient beasts like the plesiosaur, a long-necked sea monster! Mary pioneered the study of fossilised poo (also known as coprolites). Fossilised poo can tell us a lot about the ecosystems of the past!

As a woman from a working-class background, Mary had little access to formal education and was a self-taught palaeontologist. Despite this, her discoveries and scientific ideas made a huge contribution to the field, but her work was never formally recognised while she was alive. Many wealthy scientists from around the world visited her in Lyme Regis. They bought her specimens and wrote scientific papers about them.

However, they rarely credited her for her work and the payment she received wasn’t enough to save her from a life of financial hardship. Official recognition for scientific work was only given to wealthy men. Mary was prevented from joining the Geological Society of London despite her huge contributions: women weren’t allowed to join until 1904.

Henry De la Beche was a childhood friend of Mary’s and a prominent geologist of the 19th Century. He painted a picture based on Mary’s fossil finds. It showed Dorset in ancient times, full of sea monsters and strange creatures. It was very important in demonstrating that the prehistoric past could be understood through fossils. He sold prints of the painting and gave Mary the proceeds.

As we discuss historical figures in British geology, it is important to learn about the legacy of exploitation that often contributed to their wealth. Henry De La Beche made his own wealth through owning slaves and was opposed to the abolition of slavery. You can read more about this in this article by Lyme Regis museum and this profile by University College London.

Listen to the song by Geologise Theatre

In our song we imagine Mary Anning as a Rockstar! She was determined in her pursuit of science despite a lack of formal recognition and support. Tough and relentless in undertaking the gruelling and often dangerous task of fossil excavation. Fearless in the face of the huge and terrifying beasts she uncovered! She truly was a fossil hunter extraordinaire...

Illustrations featured in the video are by Lucía Pérez-Díaz. You can find her on Twitter here: @DrPerezDiaz and @theflattype

You can read more about Mary Anning and her discoveries here and here.

Back to Fossil Diversity