14 May 2021 - The pioneer of the Oxford-AstraZeneca COVID-19 vaccine, Professor Sarah Gilbert, will unveil a sculpture of the original Wuhan coronavirus particle on a scale eight million times its size at Oxford University Museum of Natural History.

2020: The Sphere that Changed the World by Scottish artist Angela Palmer will be unveiled on Monday 17 May, at the re-opening of the museum, just two miles from the laboratories where Professor Gilbert and her team developed the vaccine, which is now protecting millions of lives. Dr Maheshi Ramasamy of the Oxford Vaccine Group and Lord Patten, Chancellor of Oxford University, will join Professor Gilbert at the launch. A second work by Palmer will also be unveiled: ‘The Spike’ (pictured below), a dramatically upscaled representation of the virus’ deadly protein spike which enables the particle sphere to invade the human cell.

2020: The Sphere that Changed the World is an eerie and ethereal rendering of the coronavirus: from the front of the sculpture you are confronted by the entire sphere, with its protein spikes emerging from the surface, but as you pass around, it disappears entirely from view, only to reappear again, echoing the elusive behaviour of the virus as it continues to spread around the world. 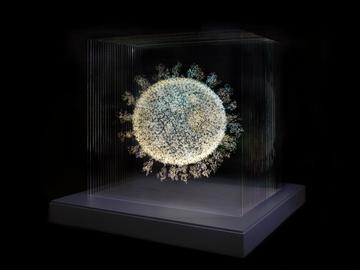 Professor Sarah Gilbert said: ‘Angela’s powerful and thought-provoking sculpture is a beautiful yet fragile representation of the virus that has become our mortal enemy. The separate image of the spike protein represents the weapon that we have used to fight back, using that part of the virus to make the vaccines to protect us all.’

2020: The Sphere that Changed the World is an experiential sculpture that Palmer hopes will offer us all an opportunity to reflect on the year our lives changed forever and to pay tribute to the groundbreaking collaborative work of scientists worldwide during the pandemic.

The artist, an Oxford University alumna, conceived the work as the pandemic began to grip the world last year. She began to focus on the physical structure of the particle itself as it spread across the world to devastating effect. Palmer said,  ‘As an artist, my work focuses on stripping back the outer layer to expose what lies hidden beneath, and I grew determined to capture this particle – the ‘invisible enemy’ – and lay it bare.’

Palmer’s ambitious vision involved engraving details of the virus’s complex structure onto multiple sheets of glass to create a three-dimensional ‘drawing’ of the particle suspended in space. However, the magnitude of this task soon became clear when the artist realised the nanoscopic scale of the particle: a thousand times smaller than the width of a human hair. 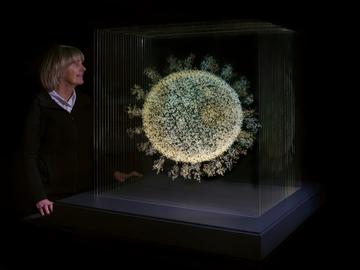 Undeterred, she sought out experts from around the world and tracked down one of the world’s leading experts in molecular modelling of coronaviruses: Dmitry Korkin, associate professor of computer science and director of the bioinformatics and computational biology program at Worcester Polytechnic Institute in Worcester, Massachusetts. Professor Korkin explained that while he had managed to model the virus ‘spike’, the most deadly part of the particle’s armoury, he was only just beginning the gargantuan mission of mapping the whole virus sphere.

While Palmer worked on the first stage of her mission, engraving the protein spike with data supplied by Professor Korkin, the scientist and his team worked round the clock to map the whole particle sphere, or to be scientifically correct, the ellipsoid which, like the Earth, is slightly flattened at its poles. Professor  Korkin worked in collaboration with Professor Siewert-Jan Marrink at the University of Groningen in the Netherlands, using one of the world's most powerful supercomputers at The Texas Advanced Computing Centre to model the sphere, armed with information from the genomic map of the original Wuhan virus.

Several months later, Professor Korkin forwarded the completed model consisting of around 60 million atoms to the artist. Palmer then faced the challenge of translating the vast and complex data set into a sequential series of accessible cross-sections to map the details. The artist spent many months of lockdown in her north London studio meticulously hand engraving 28 sheets of glass before stacking them together to form the entire sphere.

Palmer said:  ‘When I saw the virus in its entirety for the first time, suspended in its glass chamber, I was taken aback by its beauty. It was totally unexpected. It seemed in direct contradiction to the nature of this menace which has terrorised us all and continues to do so. It was hauntingly beautiful, paradoxically so.  I found it strangely transfixing and mesmerising: the invisible enemy, as we know it, was suddenly rendered tangible, trapped, while the whole of mankind is trapped by it.’

The artist believes the sculpture offers individuals an experiential opportunity to reflect on the year 2020 as a turning point in history: “The installation may prompt reflection and contemplation of loss – a loss that will, of course, be unique to each of us,’ said Palmer. ‘Laid bare, at eight million times its size, the particle may also offer empowerment and agency, seen suspended and imprisoned in glass, open to scrutiny and interrogation. The deadly and elusive entity is suddenly rendered solitary, isolated and vulnerable, unsettlingly mirroring the condition it has imposed, and continues to impose, on us ourselves.’

Professor Korkin said: ‘This will be the sculpture representing one of the darkest moments of modern human history that will stay with society for many generations. The sculpture represents one of the deadliest enemies of humankind and makes us realise how vulnerable and fragile, as glass, we, as humans, still are. But, I think it carries another powerful message — that we can understand, fight, and eventually conquer such an enemy with science.’

The presentation of 2020: The Sphere that Changed the World at Oxford University Museum of Natural History continues the museum’s commitment to showcasing work at the interface of art and science, as well as connecting with Oxford University’s groundbreaking work to produce the Oxford-AstraZeneca COVID-19 vaccine.

Professor Paul Smith, director of the Museum of Natural History, said: ‘We are tremendously pleased to be hosting the inaugural display of this beautiful, eerie and timely artwork. Angela Palmer’s Ghost Forest was installed on our lawn ten years ago, so it is a pleasure to work with her again to present a piece that truly embodies the power of art and science to move us emotionally and intellectually.’

The artist intends to create three spheres in total. This sphere on display at the Museum of Natural History has been acquired by the Science Museum Group as part of its COVID-19 Collecting Project, which aims to provide a permanent record of medical, scientific, cultural and personal responses to the pandemic.