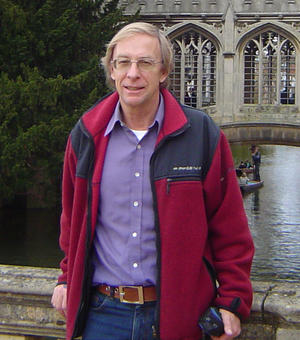 Mike Searle researches the tectonic, structural, metamorphic and magmatic evolution of mountain belts, in particular the Himalayan ranges of Pakistan, India, Nepal, Bhutan and south Tibet, and the Karakoram and Hindu Ranges. He also specialises in the tectonics of the Oman – United Arab Emirates mountain range in Arabia, the Worlds’ largest and best exposed ophiolite. He has spent more than 35 years carrying out fieldwork in these mountain ranges. During the last 15 years he has also worked extensively in Burma (Myanmar), Thailand, Malaysia, Vietnam and Yunnan, as well as specific projects in the Cyclades Islands, Greece, Northern Scotland, and SW England. He retired in 2021 and continues to do active research, mainly in Nepal, Oman, Greece, Scotland and Cornwall.

Mike Searle has been in the Department of Earth Sciences, Oxford University since 1989, first as a Post-Doctoral Research fellow, then as a Professor. He is a Senior Research Fellow at Worcester College, Oxford, and an Honorary Professor at Camborne School of Mines in Penryn, Cornwall, part of the University of Exeter. He has written three books, Geology and Tectonics of the Karakoram Mountains (1991; J. Wiley), Colliding Continents (2013, 2017; OUP), and Geology of the Oman Mountains, Eastern Arabia (2019; Springer). He has written more than 240 peer-reviewed papers, and has an h-index of 81 (2020). He has published several geological maps, including the Geological Map of the Central Karakoram Ranges (1991), and the Geological Map of the Mount Everest - Makalu area, Nepal and South Tibet (2003, 2007). He has co-edited six books, all Special Publications of the Geological Society, London. He has supervised 30 D.Phil students, and 18 MRes students at Oxford.

Want to view more of the Museum's honorary associates?